The Science of Who We Are and How We Relate
Editors: Judith Hall, Leah Dickens, Colleen Sinclair
Oct 08, 2021

When we meet a person for the first time, we try to form a first impression on the basis of little information and often facial cues drive our evaluations. Recent research has shown that among the various facial cues that guide our impressions, the eyes are the most relevant. Eyes attract our attention from birth and we are often convinced that we understand people's emotions and intentions simply by looking them in the eye.

Everyone knows that the eyes’ pupils change size according to lighting conditions. But other factors influence pupil size as well, and people may believe that such changes indicate deeper characteristics of a person, and are not just responses to lighting. Thus, an interaction partner with larger pupils may be perceived as positive and beautiful, while one with small pupils, cold and distant. The reason is thought to be that larger pupils imply positive emotions.

But how much influence does a person’s pupils really have on how other people react? After all, such changes are typically subtle. Would bigger pupils inspire liking and trust? 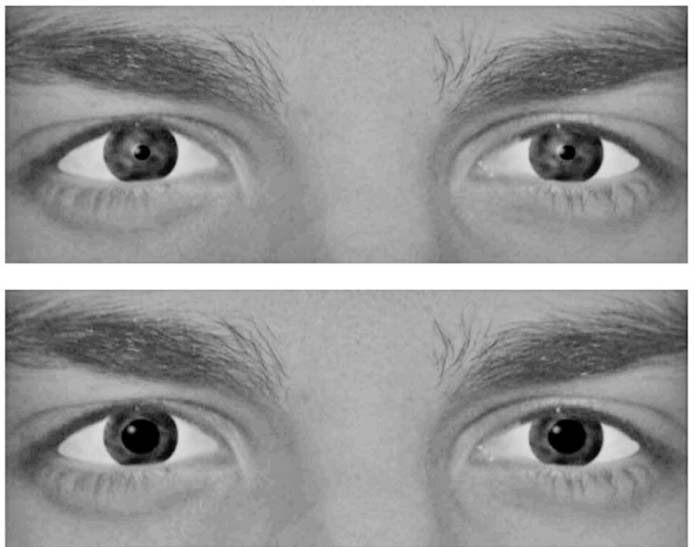 With a joystick, participants could make the face appear to come closer (by getting larger) or get farther away (by getting smaller). This way, we approximated people’s willingness to interact with someone based on that person’s pupil size.

In another study we found out that eye pupils of an interaction partner influenced trust and even willingness to conform to the partner’s opinions. Participants were asked estimate the number of letters displayed on a computer screen in less than 5 seconds. In doing so, participants saw the estimation provided by a stranger whose eye pupils were either large or small. People trusted others’ estimations more when their pupils were large and conformed to their responses. In other words, when looking into dilating pupils participants formed a positive impression of the interaction partner and this made them more susceptible to their judgment and conform.

Overall, our work suggests that that subtle facial features of the people we interact with influence our behavior. This is even more surprising when we consider that at present there is no scientific evidence that shows a difference in terms of character, personality, and intentions as a function of pupil dilation. Changes in pupil size are unconscious and automatic and people believe that such changes provide a reflection of a person’s inner state even if research has not shown it yet. Our results shed light on the factors that promote interpersonal relationships and may impact upon marketing and advertising, domains that often use images of faces.

Marco Brambilla is Associate Professor of Social Psychology and Director of the Social Perception and Cognition Lab at the University of Milano-Bicocca. He investigates how people perceive, judge, and behave toward others.

Why is this blog called Character & Context?

Everything that people think, feel, and do is affected by some combination of their personal characteristics and features of the social context they are in at the time. Character & Context explores the latest insights about human behavior from research in personality and social psychology, the scientific field that studies the causes of everyday behaviors.

Get Email Updates from the Blog

© 2022. Society for Personality and Social Psychology®. All rights reserved.