The Science of Who We Are and How We Relate
Editors: Judith Hall, Leah Dickens, Colleen Sinclair
Dec 10, 2021

Imagine witnessing a fight when walking home from a night out. If you would intervene in the conflict, at what point would you do so? Would danger make you more or less compelled to take action?

The “bystander effect” is a classical hypothesis of social psychology, suggesting that the likelihood of a bystander to intervene in an emergency decreases with an increasing number of other bystanders present. Surprising though this may sound, it is indeed sometimes true. However, recent evidence finds that emergency dangerousness can reduce or even reverse this effect—because danger removes the ambiguity of whether someone needs help, and in a dangerous situation the presence of other bystanders makes intervening feel safer. The level of danger considered in previous research is low, however, given that the bystander effect has mainly been tested in experimental settings where serious danger cannot be created. Therefore, it remains unclear how serious danger, as observed in real-life public assaults, influences bystander intervention.

We examined the influence of danger on bystander intervention using public surveillance cameras in nightlife and tourist areas of three different cities: Amsterdam (the Netherlands), Lancaster (England), and Cape Town (South Africa). This footage allowed us to observe real-life conflicts that had varying levels of dangerousness. We defined dangerousness  as aggression level, with a low level including aggressive gesturing, medium level including punches, kicks, and shoves, and high level including weapon use or aggression towards a person on the ground. We systematically observed the behaviour of the bystanders, selecting the first person who intervened in a conflict, and measuring the different aggressive behaviors second-by-second throughout the conflict.

As illustrated by the photos below, you see on the first photo that the conflicts starts, with the man in the white and black shirt gesturing aggressively (level 1 aggression). On the second photo the men start punching each other (level 2 aggression), and you see the bystanders watching. On the third photo the severity increases as one of the conflict parties hits the ground while the other starts kicking (level 3 aggression). That is the moment where one of the bystanders (the man in a black jacket) runs towards the conflict and pulls the conflict parties apart along with two women, visible on the fourth photo. 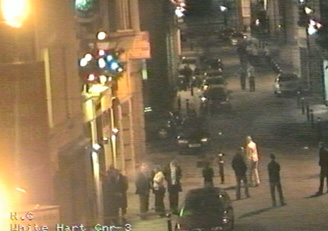 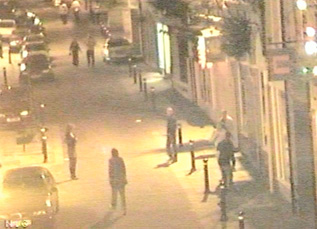 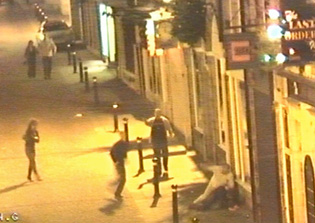 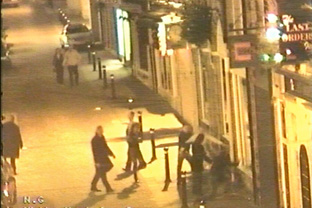 Because of our use of public surveillance footage, our results offer compelling evidence that danger facilitates intervention in real-life public conflicts. From the perspective of the bystanders, the good news is that intervention carries little risk for the bystanders themselves. In a previous study, analyzing the video sample, we found that bystanders rarely get victimized when intervening, and if they do, the severity is typically low, for example a light push or hit (Liebst et al. 2020).

Marie Rosenkrantz Lindegaard is an anthropologist, a professor of sociology at University of Amsterdam, and a senior researcher at the Netherlands Institute for the Study of Crime and Law Enforcement (NSCR). Her research is on interactional aspects of offending, victimization, guardianship and law enforcement, street culture, and observational methods.

Lasse Suonperä Liebst is a social-behavioral scientist, an associate professor at University of Copenhagen, and senior research fellow at the NSCR. His research is on face-to-face behaviour, interpersonal violence, bystander helping, and video observational methods.

Richard Philpot is a lecturer of social psychology and behavioural analytics at the Lancaster University. His research is on psychological and behavioural responses to public emergencies and high stress situations.

Mark Levine is a professor of social psychology at Lancaster University. His research is on social identity, group processes, and prosocial and anti-social behavior.

Wim Bernasco is a psychologist, senior researcher at the NSCR, and professor at the Vrije Universiteit Amsterdam. His research is on the geography of crime, offender decision making and situational causes of crime.

Why is this blog called Character & Context?

Everything that people think, feel, and do is affected by some combination of their personal characteristics and features of the social context they are in at the time. Character & Context explores the latest insights about human behavior from research in personality and social psychology, the scientific field that studies the causes of everyday behaviors.

Get Email Updates from the Blog

© 2022. Society for Personality and Social Psychology®. All rights reserved.